On June 22nd, over 160 water professionals came together to celebrate innovators and influencers in the water sector at the Water’s Next Awards Gala—part of the 8th annual Canadian Water Summit in Toronto. Water Canada editor, Katherine Balpataky said that ”This year, we received nearly 60 submissions, and with the Selection Committee’s help they were whittled down to three or four finalists in each award category,”.

Kat Hartwig, from Brisco, BC, won the Water Steward of the Year award for the work that Living Lakes Canada team has done over the years, as well as the People- NGO category for her work on conducting a national scan in partnership with SFU and U of Acadia, to assess the state of community-based water monitoring across Canada.

Ms. Hartwig pointed out that “the era of climate imposed decisions regarding source water protection and water allocation for humans and the ecosystems upon which we depend, has arrived.   Twenty-first-century challenges will require forging innovative, collaborative partnerships to collectively ensure economically and ecologically viable, climate resilient communities in Canada.” concluded Hartwig, as the Water’s Next winners were announced.

“The awards themselves have two divisions. One is for the awards given to individuals—let’s call them “people,” yeah, the People division. And the other division we refer to as the Projects or Technology Division,”

The July/August issue of Water Canada features our very own Kat Hartwig and the Water’s Next Awards (pg. 7-9). We have collated relevant articles from the issue into a shortened version here: WC_LLC revised.

The issue begins with an introduction from Living Lakes Canada advisor Robert Sanford. Introducing future potential international collaborations in order to create a new water ethic in Canada. Sanford states “One of the best exports for improved integrated watershed management has been the movement toward citizen science and community-based monitoring…The pioneering work of Living Lakes Canada…ha[s] demonstrated the potential to inform decisions at multiple scales while building the country’s water stewardship culture.”(pg. 1-4)

Thomas Axworthy  describes the need for further water policy and leadership. He identifies the critical relationship between water and peace, and how the issue of water scarcity is a threat to peace and should be taken up by the UN Security Council. (pg. 10).

Sign up to receive our quarterly newsletter: the Living Lakes Canada News Stream. Sign Up or Read Past Issues

You can help Water Stewardship across Canada. Invest Today. 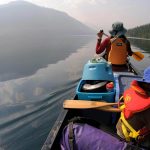